How to prevent tiles and stones from efflorescence

In chemistry, efflorescence (which means "to flower out" in French) is the migration of a salt to the surface of a porous material, where it forms a coating. The essential process involves the dissolving of an internally held salt in water, or occasionally in another solvent. The water, with the salt now held in solution, migrates to the surface, then evaporates, leaving a coating of the salt.

In what has been described as "primary efflorescence," the water is the invader and the salt was already present internally. Some people describe a reverse process, where the salt is originally present externally and is then carried inside in solution, as "secondary efflorescence." However, others would give this latter phenomenon another name entirely.

Efflorescences can occur in natural and built environments. On porous construction materials it may present a cosmetic outer problem only (primary efflorescence causing staining), but can sometimes indicate internal structural weakness (migration/degradation of component materials).

Common issues and queries you can face

Water-soluable salt from hydration reaction of cement and water migrating through porous surfaces reacts with CO2 in the air and then form the deposit of CaCO3 on tiling and/or grouting surfaces.

FACTORS OF EFFLORESCENT EFFECTS ARE FROM THE USE OF

1. When tiling onto external areas or any damp area

2. When there are upward and/or downward movements of water through structures, and then through the layer of tile adhesive

Necessary products for this solution 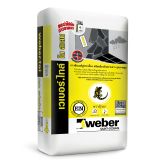 Anti-stain high performance tile adhesive for external areas and for the areas with high humidity. 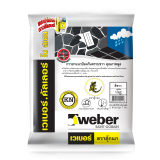