TILING OF HIGH ABSORBENT TILE (such as clay tile)

Color and texture of clay tile naturally express the earth tone feeling. There are some consideration factors for tiling clay tile

Common issues and queries you can face

Tiling clay tile with traditional mortar or inappropriate tile adhesive. Clay tiles are normally very absorbent and used for externally tiling such as pavements and exterior walls. Things to consider when tiling clay tiles are as the following. Surface has to be leveled before tiling to prevent the surface shrinkage and tile debonding. Tiling with tile adhesive suitable for the application. Avoid tiling with traditional mortar and applying the adhesive in lumps at tile back, which can cause tiles being dislodged.

Clay tiles are by nature uncertainty in sizes with high expansion. Unlike other types of industrial tiles, traditional technology is used for producing clay tiles so each piece is different in size. It is common to leave wide clearance joints when fixing clay tiles for the aesthetic reason and also to be the expansion joints. It is then necessary to use tile grout specifically designed for wide joints to prevent the problem of broken and shrinkage grout.

3.The surfaces of clay tile are very porous

Clay tiles are very porous since they are unglazed. The often found problem is the grout color stain on the tilesี surfaces and it is difficult to clean. It is then necessary to protect the tile surfaces with protecting agent before tiling or grouting.

Standard grade tile adhesive can be used for fixing clay tiles except the case of tiling on exterior walls where flexible grade adhesive should be used.  The surface of clay tiles is very porous.  It is then recommended to protect the surface before tiling and also to use the specific tile grout for wide clearance joints.

Necessary products for this solution 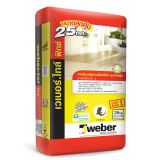 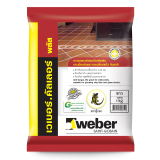